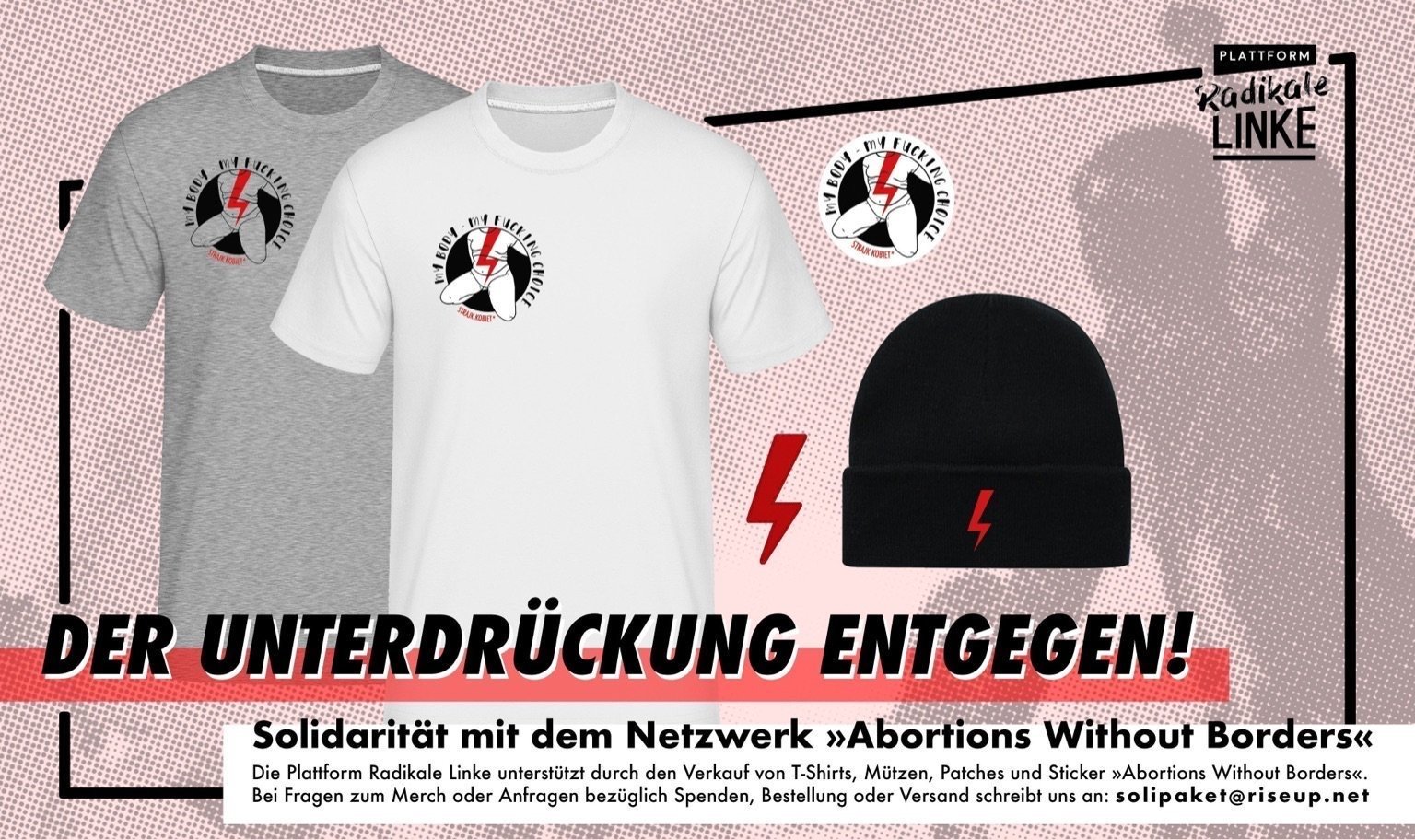 On October 22nd the constitutional court in Poland decided to ban the right to nearly all abortions. People have been protesting under the name of “Strajk Kobiet” ever since. They demand the repealing of the ban, which is heavily influenced by the Catholic Church and the ruling right-wing PiS. At the moment safe abortions are only possible abroad and therefore very expensive. The “Plattform Radikale Linke” has formed a project named “Solidarität mit dem Netzwerk Abortions without borders” in order to provide financial support by selling t-shirts, patches and beanies. All proceeds go to the network “Abortions without borders” that allows safe abortions.

For further questions regarding merch/shipping or other donations, contact us via: solipaket@riseup.net

Rząd nie ciąża, da się usunąć! The government is not a pregnancy, it can be terminated!

On 20 September 2018, the EU heads of state and government met in Salzburg to intensify and coordinate the authoritarian drift that that EU countries have seen in recent years. Points on the agenda included an increased militarization of the EU‘s external borders, as well as extended surveillance and police powers. Therefore, activists gathered in Salzburg on 20 September to send out a clear signal against this „summit of authority, militarized borders and social control“ (NoS20).

The state‘s response to these protests has been repression. And one thing is clear: repression costs a lot of money, energy and nerves. Our support can only be effective as a collective effort! So get organised: collect money for the anti-repression fund, e.g. by hosting solidarity parties, or carry out actions in solidarity. If you have friends / comrades affected by state repression, make sure you have their back. – Find further information about the campaign against repression here

We will not be stopped by state repression!

We will continue fighting for a better world!

We will use the day of the government’s annexation as an opportunity to demonstrate in front of the police detention center Rossauer Lände against this state and its repressive organs. Let not those who may be affected by repression in these protests be alone! If you or any of your comrades should be confronted with ads or arrests: There will be tea, music, and food at the rally. It can be a starting point to wait for the release of detainees. The goal is to sustain the rally throughout the day. We are particularly pleased about reinforcement, from 11:00 am we are on site!

The current federal presidential elections and the way and quantity with which in Vienna and the rest of the country is thought of problematic symbolic figures such as Karl Lueger depend to the extent that they represent German National and anti-Semitic continuities. The action at the Lueger monument at Cobenzl as a form of intervention in public remembrance politics is one of the many ways todraw attention to current and past anti-Semitic conditions.

To the full text

On the last weekend of October, in Linz the Congress “Defenders of Europe” takes place in the Redoutensäle rented by the state of Upper Austria. The congress is officially organized by the platform unzensuriert.at and the magazine InfoDirekt. Organizationally, the meeting closes directly to the right-wing extremist “Zwischentag” in Germany. The meeting in Linz brings together the current organizations and publications of German-speaking right-wing extremism (IfS, Sezession, Ares-Verlag, and many more). This group is supplemented by established elites from the field of national right-wing extremism as well as high-ranking parliamentary representatives of right-wing parties. The “Identitäre Bewegung” plays a major role, with which almost all the exhibitors are linked directly at the conference (Phalanx Europa, Wolf PMS). The conference in Linz is also distinguished by important organizers of the international networking and financing of current extreme rights in the international sphere (one percent, Natalie Holzmüller). The meeting in Linz is the largest right-wing event of its kind in the German-speaking world. It is also one of the largest, most important and also most publicly held meetings in Austria in recent years.

On June the 11th the neo-fascist organisation ”Identitäre” wants to organize their third rally in Vienna, Austria. Under the slogan “Remigration” the neo-fascists want to march through the streets. This is an explicit threat to everyone who will not qualify for their ideas of a pure race. The demand for „Remigration“ is nothing less than a call for pogroms. This year and once again we as antifascists will disturb them by any means possible! The rally on the 11th of June is an important happening for all extreme right wing structures throughout Austria and beyond. Not only its symbolical character but also its international reachout makes it a significant event for the far right.

The past marches of the “Identitäre” have been attended by Nazis from France, Germany, Italy, Czech Republic, Hungary and Slovenia. It is on us to block their march and to use the present discussion about the “Identitäre“ to show what they really are: violent fascists, who want the world structured after their racial and discriminating believes. During the movements of refugees and the migration to central Europe one could witness these self-proclaimed “warriors” for a pure society in action and the results of their paranoid craze. Breaking violently through antifascist barricades and attacking antifascists after a rally are just some examples of their actions which we find ourselves confronted with. The violent disturbance of a theatre play performed by refugees at the University of Vienna leaving several injured can be seen as a temporary peak of a series of attacks from the direct surroundings an from inside of the “Identitäre”. The explanation for this new quality of right wing violence is not only due to a process of radicalization, but also the fact that they get the space they aim to take.

Consequently, antifascist actions are necessary to confront and destroy reactionary groups like the “Identitäre”. This is, by any means, what we need to thrive for. Therefore we call out to everyone to plan and act in decentralized and creative ways on the 11th of June, the day the Nazis want to occupy the streets. Join us too on the evening before, when we will walk on these very streets to inform the neighbourhood about the Nazis and to show that a radical left critic of the sexist, nationalist and racist ideology of the “Identitäre“ is alive and sound!

Nazis are the result of our competition, exclusion and domination based society. Nationalism is not a dead ideology hold up by a few but how world affairs are put into context and need to be interpreted on all levels. It’s not about defending the status quo against the “Identitäre” – it’s about articulating and practicing critique on the present situation of society. Everything else would be playing down the brutalities that are taking place right here; right now.

Against the fortress Europe and its fans!
Abolish capitalism! Nationalism is no alternative!

Flyer “How to stop your own deportation”:

The platform for humane asylum politics calls for a demonstration themed „Refugees Welcome! No to Fortress Europe!“ on march 19th.

The disgusting circumstances that refugees in Europe are confronted with – if they hadn’t already been driven to death by its militarised outer borders – show that nation states and supranational entities like the EU and their „solutions“ are not to be trusted. The discourse about flight and migration is continuously shifting to the right. Racism though, is not a problem that only exists in the far-right, but one that is deeply
rooted in our civil society. The inhuman demands of the FPÖ, which seek to additionally worsen the situation of refugees, are now being discussed openly and put into practice by the ruling parties. Events and demonstrations, as well as attacks on refugees and their accommodation facilities, carried out by the extreme right, take place every day in Europe. We will oppose these developments.

To demand open borders and an end to the restrictive asylum politics is one step into the right direction. This fight has to signify a rejection of the desolate capitalist routine, the world’s division into nations and the conjoint exclusion. A rejection of the racist and sexist division of society. We fight for the fall of the fortress Europe, for autonomy, freedom of movement and a good life for all!